“All we like sheep have gone astray; we have turned—every one—to his own way; and the Lord has laid on him the iniquity of us all.” I saiah 5 3:6 E SV

“Your trailer door is open you idiot!” Is probably what the gentleman with Virginia license plates was trying to tell me. I could not hear him though, since we were both in our vehicles with the windows up, driving 70 mph down the interstate. Thankfully though, he was making hand motions that were clearly communicating that something was going on with the livestock trailer I was pulling, that just happened to have 5 sheep inside.

I quickly pulled over to the shoulder and turned on the hazard lights, got out, and walked toward the back of the trailer. This is where adrenaline started dumping into my gut, and continued for long enough to keep me up all night. What I saw still grips me with fear. The trailer door was open. In that same flash of a moment I watched all 5 sweet, naive sheep jump off the trailer and into oncoming traffic.

In hindsight, I'm pretty sure that the 15 or so times that the flock crossed I­95, they always waited for a semi truck to jump in front of. After their first face off with a big rig, they decided to head to the grassy shoulder off the busy road. I phoned my nearest friend. “Hey man, I got an emergency....” Providentially, I happened to be 20 minutes from one of the very rare breed of people who would answer my call with, “I'll be right there. I'll bring the boys.”

I stood, frozen, 2 paces from the steady stream of cars and trucks, watching the sheep. At this point they were peacefully munching grass, about a quarter mile from the trailer, but not moving. For the moment. Then my help started to arrive. My friend’s friend showed up first and he said he was good at backing up trailers, so I told him to get to it. Shortly thereafter, the boys came and brought some fence pieces and we started to assemble a chute by which to ‘herd’ the flock onto the livestock trailer once again.

Having experience with almost every barnyard critter out there, I can tell you that each species has its individual quirks. Generally though, they all can be chased, that is herded, where you want them to go, respecting, and responding to their differences. So now that you know that, throw it out the window.

Several times we made the perfect chute. Then when we were all in position, we would tiptoe toward the sheep to gently encourage them to walk where they were supposed to. Without fail, the would skip across the interstate. As motorists dodged sheep, several were filled with a desire to help! Some were helpful, some not so much. Even a few truckers stopped to help. At one point we used two cars and 3 tractor trailers to make a giant sheep funnel. Meanwhile, the woolly bandits were running the other direction on both sides of the road.

It's hard to communicate how stressful the scenario was. Failed attempts, constant danger. I was very confident that I would bring home sheep carcasses at best. Several times my team and I stopped to regroup and pray. Often we were out of ideas but we kept trying something. We called a veterinarian to see if a tranquilizer gun was available, the answer was no. A suggestion of herding dogs was brought up, but no one called back.

Around 3 hours after I pulled over, the sheep were holding still in a little ravine in some trees off the road. On the other side of those trees was an old fence and then an access road running parallel to the interstate. We had an hour of sunlight left and it was time for one last attempt. I cut a hole in the fence, and backed the trailer door there. Then we made a fence with everything we had, and some more pieces of fencing brought by another friend's friend. All told, we had 15 people there at that point.

We decided to form a human wall extending where the fence ended. Then, two guys would walk behind the sheep toward the trailer. I would carry a bucket of feed in front of them in a last ditch attempt to get them to come. We grouped up, and I prayed. I thanked the Lord that no one, including the sheep had been hurt, and that that was His doing. Then I asked Him to put the sheep on the trailer. Amen. Everyone got in place and I went to get the bucket of super delicious sheep food. By the time I got to my spot, the sheep were all running toward me. A little way off, they stopped. I kept calling them, showing them the delicious food. They were now 25 feet from the open trailer door. I put the food on the ground and started walking back, slowly, away from the sheep. The moment I did, they walked past the food and all lined up at the back of the trailer, looked in, and then jumped on. I walked up and shut the door. I still can't believe that no one got hurt, or worse. I still can't believe that the sheep made it home unharmed. I have no doubt in my mind that I will NEVER use that trailer again without a padlock on the door! 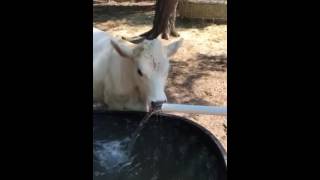 Buttercup and the well water

New life on the farm